More than 4,000 people amassed on Albert Square, having marched from surrounding towns such as Wigan and Bolton.

The proposals of the “March for Democracy” included the demands of the Chartist movement, such as an annual parliament and the abolition of the House of Lords.

Speaking on a Fire Brigades Union (FBU) engine, leftwingers spoke of the need to remember the martyrs of the massacre, where the Manchester yeomanry killed 18 demonstrators demanding the vote.

National Education Union regional secretary Pete Middleman said: “Although Peterloo was credited with kick-starting the process of creating a parliament that was 700 years in the making, it was a slow process.”

Mr Middleman argued that although the Representation of the People Act guaranteed the right to vote to men and women over the age of 21 and 30 respectively, he said it “took another imperialist war, and until the workers of Russia set the bar and gained the attention of the established order.”

Derby North MP Chris Williamson galvanised the crowd in quoting the final lines of Percy Bysshe Shelley’s The Masque of Anarchy: “Ye are many, they are few,” and was met with huge applause as he urged the crowd: “Onwards to victory!”

A homelessness charity worker, Katy, told the Star: “They turned up chanting Tommy chants and calling us all lefties.

“A few old sorts tried to reason with them but enough people kicked off so that they just had to go.

“If they want to disrupt a Peterloo rally, it goes to show you what sort of thing Tommy’s mob are about, to be honest.”

Barrie Eckford, chair of Greater Manchester Morning Star readers and supporters group, told the Star: “The new banner for the Manchester group was marched into the rally.

“It was introduced from the platform by one of the speakers. It got a huge response, the theme of the banner being Peterloo.

“It seemed so apt to be raised at its first public demonstration of our movement. It went down tremendously well and was cheered by the crowd.” 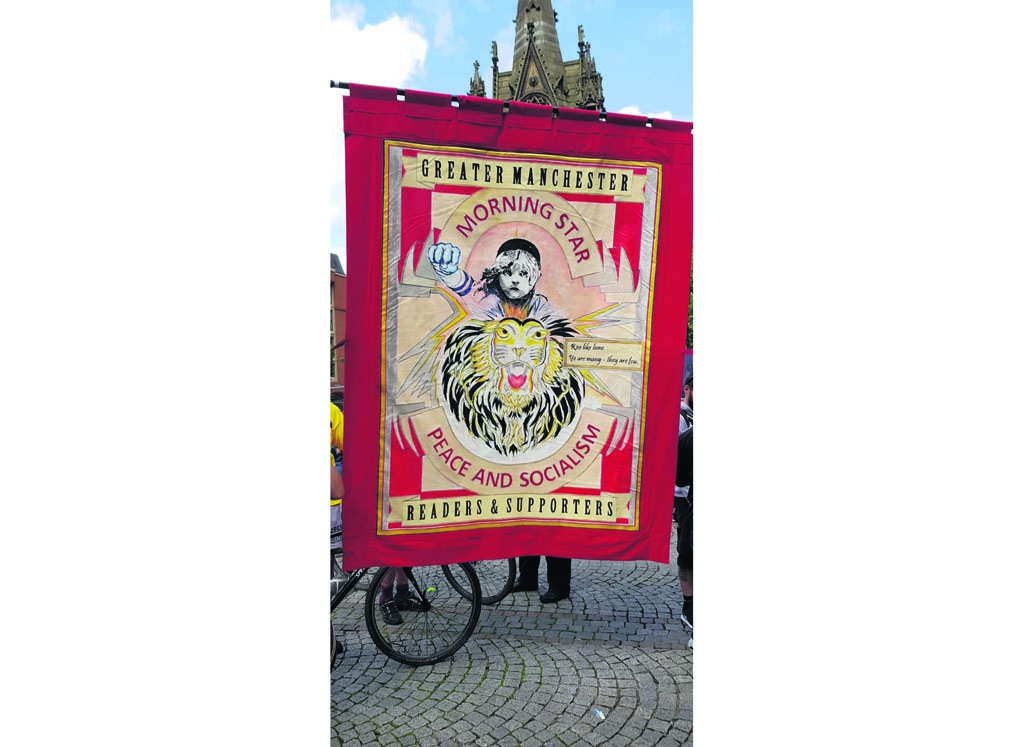 FBU north-west regional secretary Mark Rowe sent greetings to the demonstration from Greater Manchester firefighters, who are currently locked in a fight with Mayor Andy Burnham to save a series of fire stations scheduled for closure.

Paying tribute to Peterloo, Mr Rowe said: “Imagine the fear and the terror that those innocent protesters would have felt.

“The events of Peterloo reveal the profound fears held by the privileged classes of working people, when we organise, resist, and demand equality and justice.

“When we say that we will not put up with this anymore, they respond to us with extreme justice.

“We march today for all these reasons. We must not stop until we gain the society that they laid down their lives for.”

Hull unlucky not to take Chelsea to a replay