Derry reporter's life ‘snuffed out by a single barbaric act’

Lyra Mckee, LGBT activist and journalist, was gunned down in a senseless killing during riots in the Creggan area of the city last night

JOURNALIST Lyra Mckee had her life “snuffed out by a single barbaric act,” her partner said at a rally in her memory today after she was shot dead by a dissident group in Derry.

Sara Canning told the thousands gathered to pay tribute to Ms McKee that she had lost the love of her life and “the woman I was planning to grow old with.”

The vigil was called after the LGBT activist and journalist was gunned down in a senseless killing during riots in the Creggan area of the city last night.

“Lyra’s death must not be in vain because her life was a shining light in everyone else’s life,” Ms Canning said.

“Her legacy will live on in the light that she’s left behind.”

Violent clashes raged across Derry last night as the Police Service of Northern Ireland (PSNI) carried out raids in the city searching for weapons and ammunition they believed would be used in attacks over the Easter period.

Ms McKee was killed by a masked gunman who opened fire on police in a drive-by shooting just minutes after she posted a photograph of the events unfolding with the caption: “Derry tonight. Absolute madness.”

Irish President Michael D Higgins praised her as a “woman of talent and commitment, who was shot exercising her profession.”

“To be taken away in such a fashion and by those who represent nobody on this island is outrageous,” he said.

“The loss of a journalist at any time, in any part of the world is an attack on truth itself.”

Dissident group the New IRA and political party Saoradh faced a backlash today after saying the shooting was an accident triggered by an “incursion” by “heavily armed crown forces” in the Creggan estate.

The New IRA is a small splinter group formed in 2012 following a merger of several groups opposed to the peace process.

Dissidents are angry over the stalling of the peace process and a lack of progress on a united Ireland, with a referendum on the issue an integral part of the 1998 Good Friday Agreement.

Calls for a border poll have intensified since Britain voted to leave the European Union (EU).

Labour leader Jeremy Corbyn said: “This shocking attack is a reminder of the vital importance of protecting the Good Friday Agreement and Northern Ireland peace process.”

Sinn Fein hit out at the shooting and warned that the group thought to be responsible for the killing was not representative of the republican tradition, calling for it to be disbanded.

Expressing her condolences to Ms McKee’s family, she appealed for calm and said Sinn Fein “remain united in our determination to building a better and peaceful future for all.”

The party’s president Mary Lou McDonald said Ms McKee would be remembered as “a kind, caring and passionate journalist and advocate.”

“Her contribution to society stands in marked contrast to those who brutally took her life,” Ms McDonald said.

Ms McKee rose to prominence in 2014 after speaking about her struggle growing up gay in Belfast in a blog post that went viral.

“Letter to my 14-year-old self” was turned into a short film and in the five years since she penned the letter, Ms McKee became a published author with Angels With Blue Faces and had recently signed a two-book deal with Faber and Faber.

She was an investigative journalist who was trying to discover the truth about the disappearances of young people during and since the Troubles, and in 2016 was named as one of Forbes magazine’s 30 under 30 in media.

National Union of Journalists (NUJ) general secretary Michelle Stanistreet said Ms McKee was one of the most promising journalists in the north of Ireland.

“A bright light has been quenched and that plunges all of us into darkness,” she said.

NUJ deputy general secretary Seamus Dooley said: “This killing serves as a reminder of the ongoing instability in Northern Ireland and must serve as a reminder to those in positions of political leadership to end the political deadlock.”

Police confirmed that the killing of Ms McKee was being investigated as a terrorist incident. 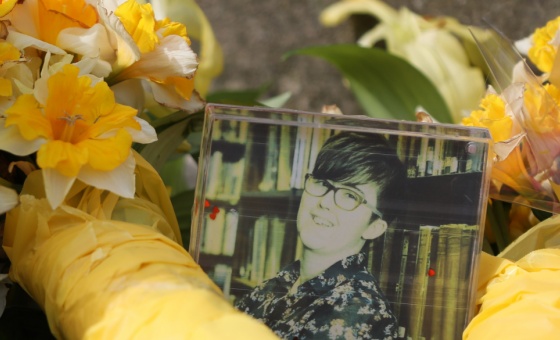