Refugees and migrants on a Libyan Coastguard ship intercepted offshore near the town of Gohneima, east of the capital, Tripoli, last year
×

THE EU has been condemned for continuing to fund the Libyan Coastguard (LCG)  despite official concerns that its government was violating migrants’ human rights and profiting from their detention.

In an uncensored document from the Presidency of the Council of the European Union in September last year, exclusively obtained by the Star, the EU flagged that the Libyan government had “continued to arbitrarily detain migrants.”

The Presidency’s document warns that "severe human-rights violations have been widely reported” inside the country’s detention centres and that some were alleged to have “links to human trafficking.”

The report says that Libya has failed to improve the situation in its detention centres and notes that "the government’s reluctance to address the problems raises the question of its own involvement."

After the bombing of the Tajoura Migrant Detention Centre in July 2019, in which at least 50 people died, Libya agreed to close it and two others. However “so far, any concrete planning has not followed this promise” the document says.

"Major challenges also stem from the unwillingness of the Libyan authorities to co-operate to enable faster evacuations from the detention centres and to provide safe alternatives,” it says.

"The reluctance of officials to co-operate is closely linked to the widely reported human-rights violations that take place in the detention centres and to the fact that the facilities form a profitable business model for the current Libyan government."

In response to a freedom of information request, the EU provided the Star with a censored “public” version of the document which praises the LCG as having "continued operating effectively."

However, the description of the LCG in the unredacted “restricted” version of the Presidency’s document aligns with complaints made by non-government migrant-rescue organisations.

A second “restricted” document seen by the Star, dated February 12 2020, confirms that the "'capacity-building and training of the Libyan Coastguard and Navy remains unchanged as a supporting task."

Haidi Sadik, a spokeswoman for the German migrant-rescue organisation Sea Watch, said that although the content of the unredacted documents was “unsurprising to those who have seen European policy kill thousands of people,” it was still deeply shocking.

"This is blatant European self-preservation and hypocrisy on display,” Ms Sadik said.

“Publicly praising an operation that is widely known, by the EU itself and those who monitor its practices, to have been a farce. Then audaciously launching a worse version of the operation NOT for the urgently needed rescue capacity but for the selfish continuation of its power in Libya and beyond, the EU has proven not to have a shred of respect for neither international law, nor basic human rights on its own territory and at its external borders.”

Axel Steier, co-founder of the German refugee-rescue charity Mission Lifeline said: “The EU already has all the measures, tools and means to rescue refugees at sea but no obvious intention to do so.

“The EU is intentionally failing to assist refugees and knowingly supporting human-rights violations by the LCG,” Mr Steier said.

“Actually, such approach can be seen as willingly and knowingly sentencing people, refugees, to death.

“This unmasks the EU’s pretence of standing up for human rights."

Deanna, an activist with Alarm Phone, a network providing support for refugees attempting to reach Europe by crossing the Mediterranean, was equally damning.

“It is interesting that the EU acknowledges that the problem is rooted in the deteriorating conditions in Libya, that the Libyan government is fully implicated in human-rights violations and torture, but does not question the fact that it keeps on pouring millions of Euros to finance this system,” she said.

“The main focus of these documents is on how to 'fight human smuggling' and how to enhance border controls. For Alarm Phone the answer is clear — the problem is not human smuggling. The problem is that people are forced to rely on smugglers in order to escape war and violence.

“We will never stop repeating that the deal with the LCG makes Europe complicit not only with human-rights violations in detention centres, but also with mass deaths at sea, making border crossings more dangerous.

“The LCG not only sends people back to violence and detention, but it also refuses to intervene when alerted to emergency situations, letting people die at sea.” 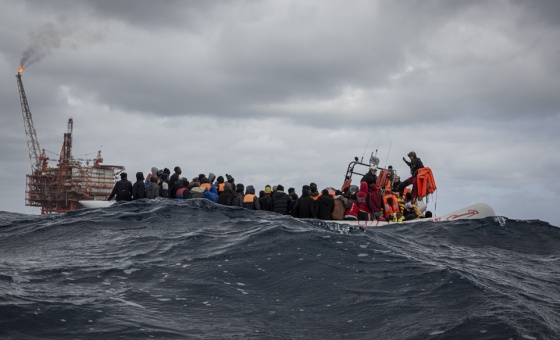