Sgt Tonroe was killed on a joint operation with US forces
×

LITTLE is known about the role played by SAS soldiers in the fight against Isis deep inside Syria.

Parliament gave approval in 2015 for air strikes against Isis targets in Syria, but crucially voted to ensure “the government will not deploy UK troops in ground combat operations,” with MPs anxious to avoid a repeat of Iraq and Afghanistan.

So when 33-year-old SAS sniper Matt Tonroe from Manchester suddenly became the British Army’s first fatality in this covert Syrian war, the Ministry of Defence (MoD) press officers had a difficult job to do.

The SAS is exempt from freedom of information laws and operates under a strict “no comment” policy. Secrecy around the corps is so pervasive that the Ministry initially claimed Sgt Tonroe still belonged to his previous unit, 3 Para and with classic British understatement, would only say the incident had occurred somewhere “in the Middle East” during an unspecified “action.”

At the same time, the Pentagon released a statement about the death of one of its own soldiers, 36-year-old Texan Jon Dunbar, who it said belonged to the elite US Special Operations Command based out of Fort Bragg in North Carolina, a sprawling barracks home to the famous Delta Force.

The US military is much less guarded than Britain when it comes to releasing details of its special forces, and the Pentagon went as far as saying Dunbar had died from a roadside bomb in Manbij, Syria during Operation Inherent Resolve — the Western military campaign against Isis.

Journalists soon realised that these two deaths were connected, and anonymous SAS sources told some reporters that Tonroe was killed by the same IED that slew Dunbar.

Britain’s then defence secretary, Gavin Williamson, praised Sgt Tonroe’s “unflinching commitment” and vowed that his “bravery will never be forgotten.”

Only it was. As the press pack moved on to other stories, Tonroe’s lifeless remains were being loaded onto an RAF Hercules plane and flown back to Britain.

They were taken under escort by the Royal Military Police in a body bag sealed with a red tag to the mortuary at Hereford County Hospital — just miles away from SAS headquarters.

As is the custom with any violent or unnatural death, medical experts then began the gruesome task of conducting an autopsy and post-mortem, in preparation for an inquest.

It was not until over a year later that a coroner, Mark Bricknell, carried out a hearing at Hereford Town Hall to establish who had died, where, when and most importantly how.

The hearing was quick, lasting under an hour, and went unnoticed by the media, even though it was open to the public.

Using inquest records we can now reveal what was said on that day.

A screen was erected in the rural town hall, to shield an SAS witness known only as “Soldier C,” lest his identity be compromised.

The coroner also read out portions of pre-prepared statements, signed by half a dozen troops, and parts of an internal investigation, probably conducted by the British Army itself.

Members of Tonroe’s family listened quietly throughout the hearing, and did not ask any questions.

They heard painful details about the last moments of their loved one, but also major areas were left unexplored.

The full story of exactly why Sgt Tonroe died in Syria is still unclear – but this is what we know so far — and it raises some troubling questions about joint operations with Britain’s closest ally, faulty explosives and the lack of scrutiny of SAS raids.

The battle for Manbij

ISIS had first rolled into Manbij in 2014, but by September 2016 Kurdish forces had recaptured most of the strategically placed town in northern Syria, near the Euphrates.

British and American special forces were stationed an hour away by road to ensure the terror gang could not make a comeback, while Royal Air Force Hercules transport planes were making two trips a week from Cyprus in order to resupply the coalition’s outposts.

Through this concerted international effort, the tide was finally turning against Isis — but in March 2018 there was a series of deadly setbacks. 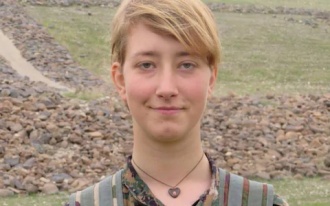 On March 15, British volunteer fighter Anna Campbell was tragically killed in Afrin while on front-line duty with Kurdish female militia the YPJ. Her remains have never been recovered.

Then on March 29, intelligence indicated that an Isis operative was lurking somewhere near Manbij.

In response, under the cover of darkness, a convoy of 12 military vehicles packed with US and British special forces wound their way towards the target’s location.

Upon arrival Sergeant Tonroe and his team quickly dismounted and spread out along a narrow walled street. As they waited, one of his colleagues, Soldier U, fiddled with a CamelBak water supply.

Then suddenly the street was thick with dust. “I could barely see a few paces in front of me,” Soldier U would later recall.

His ears were ringing and blood was running down his face. With broken teeth in his mouth, he realised he had blacked out before hitting the floor.

Still dazed from what must have been an explosion, he vaguely heard some small arms fire in the background.

His sleeves were burnt from a blast, and the soldier noted in American English: “My right pant leg was blown open from crotch to ankle and I noticed multiple holes in my leg.”

A head count began over the radio as Soldier U retraced his steps “through the cloud of dust back to the vehicle,” where combat medics were beginning to assemble.

Soldier U had survived the Manbij explosion — but his patrol partner Matt Tonroe was not so lucky.

THE SAS team were spread throughout that fateful convoy, Soldier C explained from behind the screen at Hereford Town Hall.

Sergeant Tonroe was about 100 metres away from him when the explosion went off and [Soldier C] rushed towards the blast zone where three vehicles had been hit.

Over the radio he heard the news that two friendly forces were down — Sergeants Tonroe and Dunbar.

As some soldiers carried on with the mission, Soldier C helped extract Dunbar and then Tonroe to another vehicle, which would ferry their bodies back to base.

Already by this stage Soldier C was certain his colleague had not survived the blast.

Combat medics began to focus their attention on four other soldiers who were also injured in the explosion.

The four surviving casualties were loaded onto a helicopter for fast evacuation. Meanwhile Soldier C accompanied a small convoy carrying the two bodies on an agonising desert drive that lasted up to an hour. 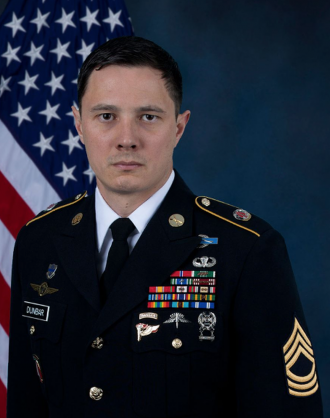 THE unit’s padre, Soldier T, liked to share a laugh with Sgt Tonroe.

That morning the padre had joked about the sergeant’s beard, before eventually kipping down at nearly midnight.

Before long he was woken with news of an incident and rushed to the operations room.

Casualties were being flown back and two more arriving “slow time” by road – a grim sign they had not survived.

He heard Sgt Tonroe was among them, and soon saw the sniper’s body wrapped in a poncho being carried in on a stretcher.

An army doctor, Soldier Q, removed the cover and also recognised Sgt Tonroe, who he had known for 18 months.

The sergeant had no clothes left on his top half, and the medic used an ultrasound machine to check for a heartbeat.

After three minutes he could find no sign of life, nor response to pain stimuli.

The sergeant’s chest and legs had extensive blast injuries and there was a large wound to his stomach.

First responders in Manbij had already applied tourniquets to his biceps and there was a surgical airway in his neck.

There was nothing left for Soldier Q to try.

He declared Sgt Tonroe dead, as the padre led the small group of British soldiers in prayer before his corpse was placed in a body bag and covered in ice.

A room on base was converted into a makeshift morgue and guarded round the clock until a plane could arrive to carry Sgt Tonroe’s remains to Cyprus, with the padre accompanying him, and then on to Britain. 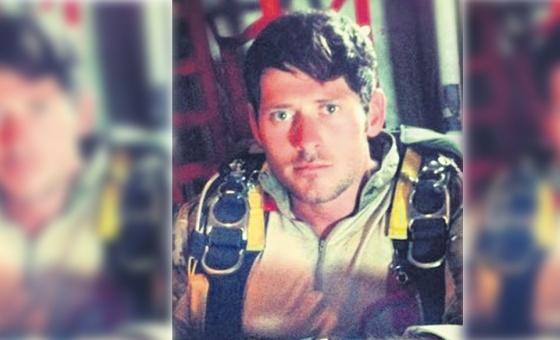