BUILDING INEQUALITY: The big 10 housebuilders generated 30 per cent of new homes in Britain in 2018
×

The Property Lobby: The Hidden Reality Behind the Housing Crisis
by Bob Colenutt
Policy Press, £13.59

IN 1975, Bob Colenutt and the late Peter Ambrose — a staunch ally of the Defend Council Housing campaign — wrote a brilliant little book, The Property Machine. It was one of the first attempts to describe the dynamics of the corporate development industry, a subject that remains shrouded in commercial confidentiality and PR spin. 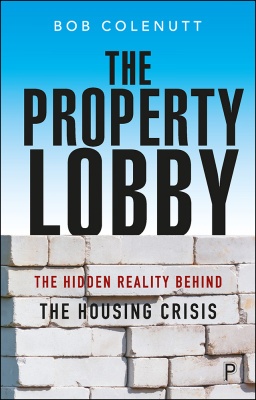 In the 45 years since, that machine has become a monster, dominating the economies and urban landscapes of global capitalism. But the forces that have allowed speculative property investment to steam-roller working-class communities around the world are still not widely understood.

This book helps fills that gap. Concentrating on the situation in England, Colenutt exposes the network of vested interests comprising what he terms “the finance-housebuilding complex.” He asks a fundamental question: how is the development industry allowed to make billions in profit, while millions are in housing need?

In an accessible and jargon-free style, Colenutt meticulously documents how the system is rigged. The big 10 housebuilders, which includes so-called social landlord London and Quadrant, dominate housing provision, generating 30 per cent of new homes in Britain in 2018.

This virtual cartel controls land, supply, prices and the planning process, which Colenutt — a planner himself — describes as “the servant of the landowner and development industry.” They’re aided and abetted by a lobbying operation of insiders who have succeeded in bending politicians to their will.

The whiff of corruption is never far away. Mega-salaries, junkets and awards are littered around, while big developers contributed £1 million to the Tories’ 2017 general election campaign.

But Colenutt also shows how Labour has fallen under the developers’ spell. This was particularly true in the Blair-Brown era but has continued at local level, where “local authorities have entered into risky and one-sided public-private partnerships, often with disastrous social consequences,” Colenutt writes. One of the worst examples of this, the demolition of council estates, persists.

The book is rich in useful statistics and case studies for campaigners wanting to expose the tricks of the developers’ trade, like fake definitions of “affordable” housing and spurious “viability” assessments. Colenutt clearly demonstrates that the property lobby is only interested in maximising private profit at the expense of local communities and people who can’t afford a decent home.

It sometimes feels like Colenutt pulls his punches, particularly on the pernicious role of big housing associations, which have joined the property lobby and argue for greater commercial activities rather than being coerced into them.

It also seems odd not to refer to the significant shift in Labour Party housing policy under Jeremy Corbyn, albeit that this is now at risk.  There’s also no mention of the development industries’ anti-trade union and shoddy employment practices.

But Colenutt offers his own prospectus for change, including radical land reform and re-energising local councils as planners and providers of housing. But, as he quite rightly says, the key to this is a government that’s “off the housing-market drug” and stops spending billions of pounds a year subsidising it.

These issues have assumed ever greater urgency with Covid-19, as it brutally exposes how unbalanced our economy and society has become at the hands of the property lobby. This book provides an excellent summary of how they did it and the information we need to stop them.