CHRIS NICKSON'S morally ambivalent books explore the turbulent social history of Leeds through the prism of the police procedural and, as he explains to Neil Mudd, his latest The Leaden Heart is no exception 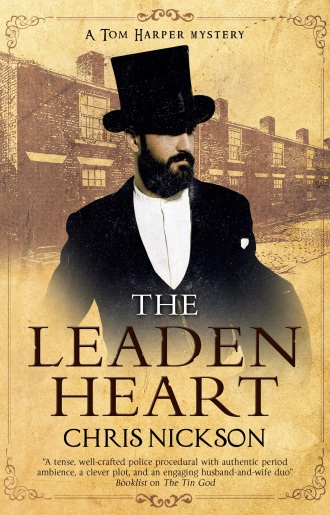 The Leaden Heart is the latest in his Inspector Tom Harper series that began with Gods of Gold, a tale of child abduction and murder set against the Leeds gas workers strike of 1890. It is now the end of the century and the Boer War is looming large in the public imagination.

The reverse alchemy of the titles feels pointedly symbolic. “As a crime novelist, I’ve gone more and more into the grey areas,” Nickson tells me when we meet. “Black and white doesn’t really exist.” The Leaden Heart is shot through with a morality every bit as murky as the soot which darkens the red-brick city walls.

Inspired by the hard-boiled style of US noir, Nickson’s prose is fast-paced and frugal, its patina of the past worn lightly. “With historical fiction, you have to make people feel they’ve walked through those streets at that time. I use a lot of street names to ground it — little markers and bits of dialogue — very sparing.”

The author’s fascination with his home city emerged in the 1990s. “I was living in Seattle at the time and, coming back to see my parents, I started picking up Leeds history books. I’d been reading a lot of Chandler by that point, and I asked myself: 'What would English noir be like?’

“The constant in most of my work is the changing face of Leeds. From the 1830s, the first Irish came, then later in the century a larger Jewish population arrived and so on and so forth into the 20th century. It does alter the perspective of Leeds and that’s what fascinates me.”

Unscrupulous land development practices in late-Victorian Leeds inform The Leaden Heart, which unexpectedly detours into a succession of unhinged killings. In common with crime-writers Maj Sjowall and Per Wahloo — whose Martin Beck series took a scalpel to Swedish society — Nickson is not particularly interested in the manner of how life is conceived or ends. Rather he is concerned with how life is lived, particularly by those destined to fall through history’s cracks.

He is drawn to political figures like Isabella Ford, Edward Carpenter and Tom McGuire. The latter, a self-educated poet, trade unionist and committed socialist, is a personal hero of Nickson’s. “They figure large in the Leeds landscape but few people know they were even there. It’s trying to dust off the history from them,” he says.

“I have two ancestors buried in unmarked graves in Beckett Street cemetery and another who is in a Guinea grave, so it’s my family history too – and that of a lot of other people.”

While Tom Harper has grown less shiny seven books into the series, his wife Annabelle has become its moral fulcrum. “I hadn’t anticipated that when I started out,” Nickson says, “but I’ve certainly taken that on.”

Her role as a Poor Law Guardian forces her to grapple with the knowledge that social justice is seldom well-served, except by those who serve themselves. These are the grey areas which historical fiction ignores at its peril, Nickson suggests. “It’s a cliche but if you don’t know history you’re doomed to repeat it. I think there’s a lot of truth in that.”

The Leaden Heart is published on March 29 by Severn House.