The End of the Megamachine
By Fabian Scheidler
(Zero Books, £19.99)

SPANNING 5,000 years of history, this magisterial book by Fabian Scheidler explains how and why both our ecosystems and societies are on the brink of collapse. 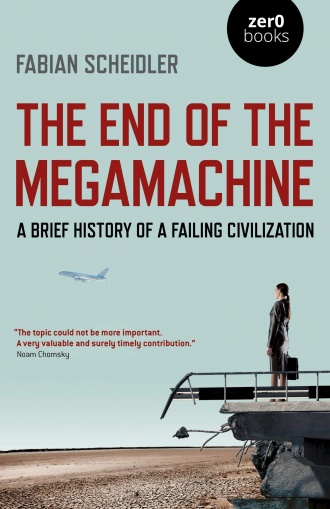 Scheidler does not provide a chronological history in the traditional sense but looks at the emergence of modern civilisation and the capitalist system from new and unusual perspectives. He does not aim to provide a history of humankind but the story of a specific social system.

To understand the origins and functioning of the “great machine,” he argues, one must also examine its prehistory and he looks at the role played by wars, the evolution of the metallurgical industries, the key role of coal, the origins of the military-industrial complex, colonialism, slavery and much else.

“We are witnessing how the entire planet, which took four billion years to develop, is being used up by a global economic machinery that produces vast quantities of goods and mountains of refuse ... insane wealth and mass misery, massive overwork and forced inactivity,” he writes.

“At the core of it all is the unrelenting increase of wealth stored in the bank accounts of a relatively tiny number of individuals. Today, 42 men possess the equivalent of that owned by the poorer half of the world’s population.

“It seems that the only remaining goal of the global “Megamachine” is to incinerate the Earth for a small clique of the absurdly super-rich.”

At heart, everyone realises how destructive this system is and that it is sick and makes us sick. Across nations and classes, millions no longer believe in the future of the system while, at the same time, there is an oppressive sense of impotence.

Yet there are alternatives. Almost every sector of our society and economy could be reorganised in a different way. All of the world’s agriculture could be converted to organic farming in just a few years, eliminating a considerable amount of greenhouse gas emissions.

A money system serving the common good could replace the current financial casino economy and there are already concepts of decentralised renewable energy, intelligent public transport systems, the fair division of labour and regional economic cycles. All this is possible.

It has been said that the reason we have been led down this insane and fatal path is due to neoliberal politics, which in recent decades have led to increased social inequality and environmental devastation but this book asserts that the causes lie much deeper.

Neoliberalism is only the most recent phase of a much older system that, from its inception roughly 500 years ago, was founded on predatory exploitation.

Every society cultivates its myths to establish and justify its own social and economic structures. But the problem with such myths is that they not only give a distorted picture of the past but reduce our ability to make the right decisions for the future.

The last 500 years of European expansion is a history that for most of humanity has been associated with expulsion, impoverishment, destruction of environments and massive violence, including genocide.

This violence is not a thing of the past but one of its permanent structural components. Current testimony to this is provided by the pending destruction of the livelihoods of hundreds of millions of people as a result of climate chaos.

The violent expansion of the capitalist system and the injustices it inevitably produced were justified by the claim that the West was undertaking a historical mission to bring salvation to the world.

In close connection to the military and economic levers of power, schools, universities, the media and other ideologically influential institutions played a decisive role in elaborating and disseminating this mythology, despite important emancipation movements that continually arose within these institutions during modern times.

A central thesis of this book contends that during the 21st century, the “Megamachine” will encounter two limitations that will be insurmountable when combined.

The first is inherent in the system itself. For about four decades, the global economy has been headed towards a structural crisis that can no longer be explained away by the usual economic cycles.

At the same time, the system has been offering fewer and fewer people a secure livelihood. Although the 200 largest corporations in the world account for 25 per cent of the gross world product, they employ only 0.75 per cent of the world’s population.

More and more people are being dropped from the economic system and as the ability of the “Megamachine” to offer people a perspective for the future fades, the belief in its mythology is also disintegrating.

The “Megamachine” has created an arsenal of weapons with overwhelming destructive power and is in the process of undermining the Earth’s great life-supporting systems, devastating flora and fauna, soils, forests, oceans, rivers, aquifers and the climate system.

Industrialised civilization has already triggered the greatest species extinction since the disappearance of the dinosaurs 65 million years ago. At the same time, the growing climate chaos threatens to make entire regions of the Earth uninhabitable, throwing more fuel on the flames of conflict.

Crises can set long-term learning processes in motion — and there are important lessons to be learned from the coronavirus pandemic.

It has shown that if they want to, states are quite capable of acting and can very quickly make far-reaching social decisions, including massive interventions in the economy and even in property structures.

In the long term, the historical task is to free the state and big business from their interdependence and to make the state an institution obligated to serve the common good.

This book is a valuable contribution to achieving that task.

The streaming medium is the musical message now, whether we like it or not

Unite’s retired members are fighting back against TV licence injustice

Alex Scott: Abuse was too much for me