Brazilian communists: ‘we can win a life worth living’

CHARLIE MAY spoke to Young Communist Union (UJC) international secretary Ligia Fernandes about the rise of the far right in Brazil, the failures of social democracy and where the left goes from here

Charlie May: The British left were shocked by the election of Jair Bolsonaro — how did the UJC characterise this development?

Ligia Fernandes: The rise of this right-wing reactionary government has its most clearly visible origins in the 2008 global financial crash. It was in the aftermath of this world-wide calamity that the Workers’ Party (WP) entered into a period of severe crisis. 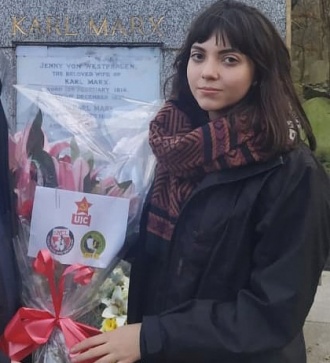 From 2002 the WP, headed by Lula, implemented some very important and popular policies that benefited the working class of Brazil. The party also developed vital strategies to protect and enhance the lives of the indigenous people and their environment.

It is important to understand that domestic and global capitalism are not the same thing, that they have different needs and priorities and develop different strategies.

But they can periodically come into partial alignment on a number of key issues in a constantly transforming political landscape.

The WP understood the power and influence of capital and so calibrated its entire outlook, policies and method of working to avoid a direct confrontation.

On the one hand this might have allowed the party to bring forward many progressive policies, but on the other hand it left it vulnerable to manipulation when the pact went sour. This is what happened after the financial crash.

Both the Brazilian capitalist class and the representatives of transnational monopoly-finance capital concluded that the WP were not the party to put in place the measures that they not only wanted, but now needed. The pact was now broken.

CM: The Brazilian left had been considered by many in Britain as a particularly strong, vibrant and popular force. How did the situation change in such a dramatic way?

LF: The WP began to lose its popularity at the same time as the mobilisation of the extreme right of Brazilian society. The media, the church and business all rallied to dominate the political discourse and reassert hegemony over the consciousness of the Brazilian people.

This is combined with the fact that the WP had been the party in office for a fairly long stretch of time. This made it easier to pin all the blame of the economic problems not just on the party but on left-wing politics and ideology in general.

By portraying the WP as the “Establishment,” it then became possible to attack the entire labour movement, campaigns for women’s rights, LGBT rights and black and indigenous people. This paved the way for the coup in 2016 as corruption and anti-Establishment rhetoric became a recurring theme.

Following the removal of Lula and then Dilma Rousseff, Michel Temer allied with right-wing liberals to implement anti-people policies on the behalf of finance capital. Attacks were made on the health and education reforms put in place by the WP.

In 2017 the Temer government announced that the “popular pharmacies” created in 2004 to give access to the poorest people in society would be abolished.

In that same year the Amazon reserves in the northern states of Para and Amapa were dissolved to enable private mining and to convert the forest into land for big agro-business. During 2017 extreme poverty has been shown to have increased by 11 per cent.

By the time of the 2018 election the campaigning and media onslaught against the WP and Communist Party had reached a crescendo. It was very difficult for the communists to win over the consciousness of the workers amid such an intense drive.

With Lula taken out of the picture, the people had no popular reference point which made it easier for the right to fill that space.
The issue of public security and safety was a major part of the attacks on the left.

Crime was raised continually as the major issue that needed to be dealt with. Bolsonaro and his media allies spoke about arming people to fight crime, especially in Rio de Janeiro.

By “people,” this did not mean the WP, the communists or the workers. It meant the rich people.

After such a constant and intense assault, it became impossible to win the workers over and so the vote went to the right.

CM: What have the changes been since the election and how has the labour and progressive movement dealt with them?

LF: The rhetoric is now extreme and an expression of a new kind of fascism. Bolsonaro uses the symbol of the .38 revolver to show how much he is opposed to crime and violence.

He is like an actor who conveys a fake paternalism. He says that he believes that people should work and that he is going to introduce the idea of work — as if people do not already work or else are desperate to get a job.

Churches, which are a huge phenomenon in Brazil and Latin America, are mobilised against the left and help to popularise this anti-people, anti-communist and deeply reactionary sentiment.

The government is bringing forward attacks on education, pensions, utilities and infrastructure.

All state-owned enterprises are under threat now as the government tries to make ways for them to be beneficial to the capitalists. This is especially significant in the case with Petrobras, the state-owned oil company.

CM: How has the rise of Bolsonaro informed the UJC’s analysis of the political situation and the role of communists in Brazil?

LF: The failure of the WP is that it did not organise the workers or make any kind of organic movement among the people. This is the biggest error of social democratic “left-wing” parties.

This is why Venezuela has managed to stand up to all the assaults, mostly recently by Juan Guaido when he stood in the street and said “I am the president.” There, the left and the workers are united and they have built organisations that work for a better society.

The class collaboration idea of the WP did not do that and they do not realise that there is a historical contradiction between the working class and the bourgeoisie.

It does not matter how advanced capitalism is, it is clear that the idea of radicalised class collaboration is never a way out for the workers.

We must go into the neighbourhoods to fight for the future. There is a lot of faith in Latin America that we can win a life worth living. For us, we have no choice.