MY DAD reading The Beano to me was how I learnt to read and waiting for the comic to fall through the letterbox was exciting. 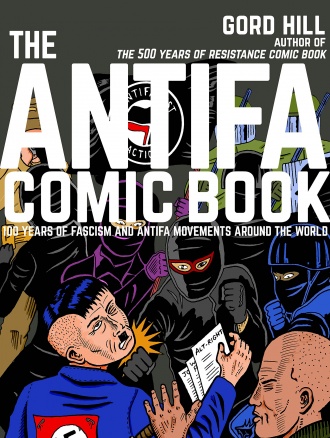 Later I was reading 2000AD and then Viz and in my teens buying zines at gigs and bookshops such as the much missed Compendium in Camden.

I loved the immediacy of zines. Back before the interweb in the 1970s and 1980s, finding out about bands, politics and ideas was done through the medium of zines. It frequently took years from hearing about a band to actually buying and hearing a record by them.

These days it’s all done by a few clicks. Blogs and podcasts, at least the good ones, seem to be doing the job of zines. In the early 1980s, I had my own zine and wrote for several skinhead ones and I’ve been running a poetry zine for over 25 years. A zine, I’m proud to say, that is still cheaply made and not on the interweb.

I recently saw The Antifa Comic Book in Housmans Bookshop. Produced in graphic-novel style, it tells the history of 100 years of fascism and antifa movements. As the teenage me would have, I bought a copy and enjoyed reading it.

The book covers Mussolini through to the alt-right and opposition to them. It’s historically well informed but there is a strange prevalence of people wearing caps in the cartoons. Italy, Spain, and Germany are well covered and also Europe, the US and Britain.

The book stresses that anti-fascists “confront fascists both ideologically and physically. They also work to create anti-fascist and anti-racist culture.” There’s good class analysis throughout the book. While the middle-class left frequently call on the police and the state to ban fascist marches, more class-conscious and direct anti-fascists know that fascism is a threat to the community not the state and so the response to fascists must be from the community.

I found the drawings of Red Action particularly funny— one of the successes of early 1980s anti-fascism is that there’s so little photographic evidence of squadism. It worked on the street as well as in the courts.

It’s no fault of Gord Hill, who made the comic book, that he’s not sure what the militant anti-fascists of my generation looked like. He’s an Indigenous Canadian writer and artist from the Kwakwaka’wakw nation and lives in northern British Columbia.

To have the 43 Group, Red Action and Spain’s Mujeres Libres in his book shows good research in terms of politics and methods and the book is an excellent read for people looking to the history of anti-fascism and how to challenge the fascism we’re faced with today.

One weapon used very successfully recently by anti-fascists is the milkshake, with Tommy Robinson’s dousing milked on the internet for jokes. Humour is a particularly sharp weapon and an essential part of working-class culture. It should always be in the anti-fascist arsenal.

In The Meanings of Comedy, written in 1956, Wylie Sypher has a “social meanings of comedy” section in which he notes: “In its boisterous moods comedy annihilates the power of evil in the person of the scapegoat... this triumphant laughter is a mode of defence, because the enemy who has power over us must be neutralised by transforming him into a harmless victim.

“Comedy is at once a defence against the Enemy and a victorious assault upon Him. He vanishes in an explosion of choral mirth.”

Henri Bergson in his 1900 essay Laughter puts it all the more directly: “By laughter, society avenges itself for the liberties taken with it.”