Alpha City: How London was captured by the super-rich
by Rowland Atkinson
(Verso, £13.59)

THIS book, essential reading before Covid-19, is even more so now. 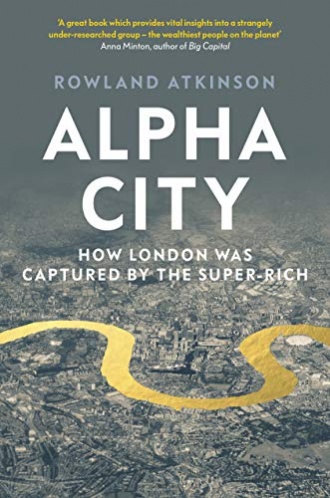 In it, Rowland Atkinson vividly describes how the super-rich have distorted the socioeconomic and physical landscape of London, but the most important argument goes beyond the fate of one city.

At a time when global capitalism is struggling to cope with a health crisis of its own making, Atkinson reminds us that before, during and after coronavirus there’s plenty of money for some.

He quotes Oxfam’s 2018 finding that 26 billionaires have wealth equivalent to that of half the world’s population. The fortunes of the super-rich could wipe out the debt of developing nations 25 times, with enough left over to clear the budget deficits of Britain and the US.

That was pre-Covid, but as several reports have shown, the super-rich have only got richer during the pandemic. It’s vital to bear these facts in mind as the labour movement formulates demands for the post-Covid age.

Atkinson, writing like a literary equivalent of Mohammed Ali, floats like a butterfly but stings like a bee and, as he guides us on a journey through a grotesque metropolis of haves and have-nots, he constantly reminds us that, however alien they may appear, the lives of the super-rich few directly impact on those of the many.

But the “Alpha City” of the book's title didn’t happen by accident. Alongside lurid tales of one person spending £100,000 a month in Harrods and the property developer Nick Candy paying £160 million for a single home, Atkinson makes it clear that the super-rich have been invited into London to do precisely this.

The utterly misguided belief that wealth flows downwards continues to dominate urban policy, long after it was championed by Margaret Thatcher. The book lays bare the system of tax-breaks, land deals, Jenrick-like cronyism and permissive planning rules that have allowed the likes of Candy and Richard Desmond to flourish at the expense of others.

As Atkinson puts it: “Politicians, seeking investment in their town or city, simply act in tandem with the needs of capital by second-guessing the agenda of the super-rich.”

A key part of this system of abuse is the way private developers are enabled by central government and local councils to cheat working-class communities from their right to genuinely affordable homes.

Speculative capital seeks to consume everything in its path, including council estates in what it regards as “high value” areas. Atkinson argues that despite the false claims of “places for all,” the now widely discredited model of estate demolition and regeneration has “proved a massive gift to developers and high-income buyers or investors.”

We are, potentially, entering another phase of this disastrous cycle. The Tory government’s aim to “build, build, build” should sound a warning to the labour movement. Prime Minister Johnson, like Mayor of London Johnson before him, only understands the needs of corporate elites and will continue to facilitate fortune-building on their behalf.

Labour must not be complicit. A clear break is needed from the toxic ideology underlying the Alpha City in which, as Atkinson says, “losses are borne by the many, gains go to the few, corporate pay is unchallenged, the ranks of the wealthy burgeon and the poor are cut loose.”

The book rightly concludes that “there is a palpable sense of anger” against a system that only works for a privileged minority. The post-Covid period will only harden social and ethnic segregation in London and other cities built on the Alpha model.

It’s time to tear down those walls and build homes and places for all.