Radical arguments for a new humanism

AS A  broadcast journalist for the best part of two decades, Paul Mason has reported from the front lines of revolts across the world and in his books sought to theorise about them with a far-seeing eye. 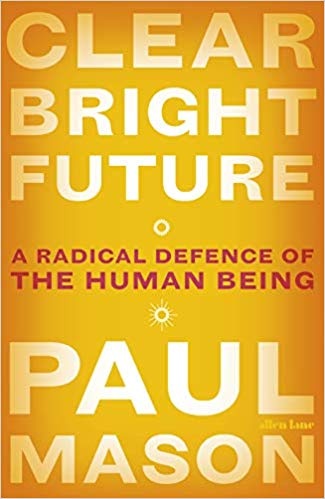 After covering the so-called Arab Spring in Why It’s All Kicking Off  Everywhere, he argued that the new agent of history is the networked individual. As social-democratic parties across Europe collapsed, his book Postcapitalism provided an alternative to rearguard welfarism by illustrating how digital technologies are already paving the way towards a more co-operative economic model.

In Clear Bright Future, Mason takes on the Trump era and the rise of the alt-right with, as the subtitle declares, a radical defence of the human being.

He opens with a question: Will you accept the machine control of human beings or resist it? The election of Trump revealed that this — somewhat nebulously defined — machine control is a toxic melange of free-market ideology and algorithmic domination.

To take control, though, we need to figure out who we are. For Mason this is vital because it is the erosion of the human that has been instrumental in reproducing the hegemony of neoliberalism and fuelling the rise in online bigotry.

If we are reduced to human capital, we surrender ourselves to market forces that will only exacerbate already existing class, racial and gender inequalities.

After outlining the depredations of the neoliberal self, Mason takes us on a dizzying tour through centuries of Western philosophy.

From Aristotle to Arendt, via the early writings of Marx, humanism is recovered in order to retool it for the challenges of the 21st century.

Unlike other recent works with an accelerationist bent, Mason seeks to bolster his techno-utopian proposals with a robust ethical framework.

Admirably, Mason’s books never shy away from tackling big ideas and making them accessible to a general audience.

Free will and determinism may seem like arcane philosophical debates but he forcefully explains how they underpin our assumptions about issues of the present, like the regulation of artificial intelligence.

Contemporary anti-humanist trends in academia such as object-oriented ontology, which rejects the privileging of human existence over that of non-human objects, are also taken to task.

Perhaps with the emergence of the school climate strikes and Extinction Rebellion, the next instalment in his grand theory will tackle climate justice.

This one, with all its ragged incompleteness, nevertheless offers a bracing intervention in the current culture wars and it’s imbued with a refreshingly pragmatic optimism too often absent from leftist analyses.

Syrian army drive out jihadists as they make rapid gains