THIS second edition of Marx’s Das Kapital and Capitalism Today by Communist Party of Britain General Secretary Robert Griffiths has a number of important updates which add significantly to the impact of the book.

It’s a gold mine of information and, as a previous reviewer has noted, it explains with great clarity what Marx’s seminal work tells us about our world today and where debate and controversies continue.

It deserves to be widely read and debated, not only throughout the labour movement but also by the emerging climate change movement and among Marxists of different persuasions and traditions. 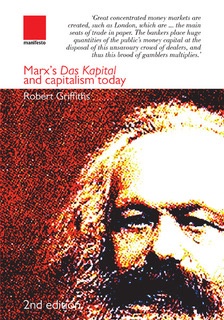 In the first edition, Griffiths refrained from offering a detailed assessment of the performance, strengths and weaknesses of the Soviet Union’s economy.

This second edition maintains this approach but does address in a little more detail some of the analysis and criticisms made following the collapse of the USSR.

Similarly, the new edition contains more analysis of “socialism with Chinese characteristics” while continuing to resist easy conclusions. There is also more analysis of the EU and the need for communist and workers’ parties across Europe to campaign to repatriate powers from EU institutions to democratically elected governments at central, national, regional and local levels.

The most welcome addition is new section A Green Marx? It draws attention to the importance Marx and Engels attached to environmental issues and humanity’s relationship with nature but, at a more immediate level, Griffiths questions whether capitalism has the capacity to counteract global warming effectively.

It’s a message increasingly understood by climate change protesters, as their adoption of the slogan “System Change, Not Climate Change” demonstrates.

Marxists of every tradition tend to agree that Marxism is a science and should be reviewed and developed in the light of emerging evidence, yet much discussion across the Marxist left takes place in silos, with very little communication between them.

There are exceptions, such as the debate on the so-called Temporal Single System Interpretation of Marx’s Law of Value to which Griffiths alludes but these tend to be the exceptions rather than the rule.

While it is unlikely that Marxists of every persuasion will agree with every argument in this book — his persuasive rejection of Tony Cliff’s “state capitalism” theory won't immediately appeal to those who venerate Cliff’s contributions to Marxist theory — the arguments are set out objectively and the evidence on which they rely is identified.

If this book does no more than to encourage debate among Marxists of different traditions, this could be its most significant contribution.