It’s the Media, Stupid! is a timely exposé of the shameful state of this country's national press, says PETER LAZENBY

An attack story in the Daily Mail
×

JUST published, It’s the Media, Stupid! appears against the background of the majority of the national press defending and covering up for a Tory government whose ineptitude in the handling of the coronavirus crisis is difficult to parallel. 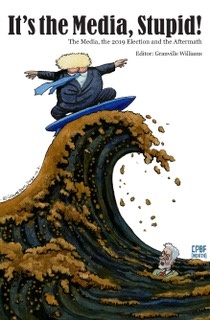 The press’s performance, and the manipulation by the government of the BBC in its coverage of the crisis, represents yet another low in Britain’s media — depths most recently plumbed from 2015 to 2019 in its vilification of Jeremy Corbyn during his leadership of the Labour Party.

Produced by the Campaign for Press and Broadcasting Freedom North (CPBF North), which during the 2019 election campaign produced six issues of  ElectionWatch, an analyis of daily press coverage of the campaign, its anticipation of the onslaught proved all too accurate.

Based on the media campaign against Corbyn, It’s the Media, Stupid! rips apart any remaining shreds of the myth of a democratic and objective free press in this country.

Its various authors include experienced newspaper and broadcast reporters whose insight and knowledge come from years of personal experience working inside the media.

As former BBC TV reporter Nicholas Jones writes: “Rarely have editors and columnists of Conservative-supporting newspapers been so calculated and co-ordinated in demolishing the credibility of a British politician.

“Between his election as Labour leader in 2015 and the 2019 general election campaign, Jeremy Corbyn’s reputation was well and truly trashed. Any semblance of trustworthiness he might have accrued as leader of the opposition was torpedoed in a sea of slurs and smears.

“A masterclass in character assassination was delivered with shameless superiority.”

Rightly, the BBC does not escape criticism and author and academic Julian Petley cites one small example: the corporation’s co-operation in deflecting criticism of a story about an infant pictured lying on the floor of Leeds General Infirmary because not even a trolley was available, due to the state of the NHS.

The BBC reported as absolute fact the lie fed to it by Tory media officers that, during a subsequent visit to the hospital by Health Secretary Matt Hancock to offset the damage, Labour protesters punched one of his aides in the face.

The lie was uncovered through photographic evidence shortly after — but the deflection job had been done.

Tony Harcup links the press’s 2019 election tactics to the general election campaign of 1992, when the Sun could not contain its glee at the defeat of Neil Kinnock, with the headline “It’s The Sun wot won it” boasting shamelessly of its, albeit self-perceived, role.

The book is illustrated lavishly with reproductions of pages from the tabloid press during the campaign against Corbyn, including headlines such as: The sexpot Trot — an “investigation” into Corbyn’s “posh past” by the Daily Mail in 2015 —  “Terrorists’ friend,” from the same paper soon after the Manchester Arena bombing before the 2017 general election, which nevertheless saw Corbyn destroy Theresa May’s parliamentary majority,  and “A danger to Britain,” in The Sun in the wake of both the Manchester bombing and the London Bridge terror attack.

The final press assault last year on Corbyn before the election reached a hysterical crescendo with warnings of a repeat of the industrial unrest of the 1970s if Corbyn was elected, Corbyn as a threat to national security and Corbyn’s fictitious anti-semitism.

There was a final flourish of headlines in praise of Boris Johnson that stopped only a little short of beatification.

The book’s editor Granville Williams, probably Britain’s leading expert on the media, who will be speaking at a special Morning Star Zoom meeting on the media with Star editor Bem Chacko on May 20, likens the press’s 2019 election performance to its current coverage of the government’s handling of the coronavirus crisis.

“Many of the patterns of behaviour we saw in the election are sadly being repeated during the current crisis, and the government is escaping scrutiny because of the diversionary tactics of the popular press,” he says.

Importantly, the book proposes ways ahead to confront the continuing problem and the threat to democracy posed by the press in chapters by Unite assistant general secretary Tony Burke and Louisa Bull, print-union activist and Williams, co-coordinator of the CPBF.

Appropriately, cartoonist Steve Bell depicts Johnson surfing the crest of a wave of sewage engulfing Corbyn on the cover of the book. It costs £9.99 and can be purchased from coldtype.net/MediaNorth.html.

Williams, Bull, Labour's Chris Matheson (shadow minister for digital, culture, media and sport) and Morning Star editor Ben Chacko will be speaking at Covid19, the media and why we can't go back to business as usual, an event organised by the London Morning Star Readers and Supporters Group that takes place on Wednesday May 20 on Zoom at 7pm.

To book a ticket, visit tinyurl.com/ycwfqo7c.

There's no holding back the popularity of socialist policies