BOOKS Heroic in word and deed

The Cuban medical teams who volunteered to combat Ebola in West Africa truly lived up to that description, says BOB ORAM

THE word “heroes” is regularly used and abused, but never has it been more apt than when describing the Cuban volunteer doctors, nurses, technicians and public health specialists who responded to an international call for help in the fight against Ebola. 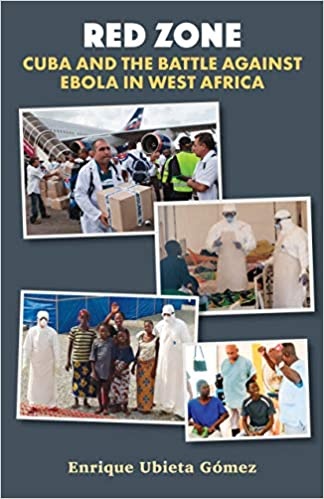 In what was described by some of the volunteers as a “suicidal mission,” 300 were selected out of the 12,000 who volunteered to go in 2014 to Guinea, Sierra Leone and Liberia. In a matter of weeks, a brigade of 256 headed out after intensive training in Cuba.

The red zone of Gomez’s title is the area with the highest levels of contamination. Patients presenting symptoms are isolated there until they recover or die.

Brigade head in Guinea Dr Carlos Castro Baras tells how “we were all afraid at the beginning — afraid when we suited up, afraid when we entered the red zone, afraid when we touched anything, when we walked. We had all the symptoms of psychological terror.”

With temperatures reaching 50°C, the hermetically sealed “space suits” were fatigue-inducing but vital, as about 70 per cent of those arriving at the treatment centre had Ebola, and mortality and infection rates were very high.

Team spirit is always evident in this account and, as Dr Rotceh Rios Molina says: “We established a norm that was followed everywhere in Sierra Leone. There were no differences between doctors and nurses. Everyone had to perform IV insertions, wipe bottoms and mop up vomit.”

The youngest member, 25 year-old Victor Lazzaro Guerra Viera, was a paediatric nurse in Cuba. He describes how “I was called to see a child who needed an emergency IV in order to receive a blood transfusion … the family had no money to pay for the transfusion.

“So we pooled some of our own money, paid for the blood bag … I was told the boy had tested positive for Ebola but his life was saved thanks to what we had done at that moment.”

Dr Felix Baez Sarria contracted Ebola himself and, dangerously ill, was transferred to Geneva. It was a harrowing time for the whole of Cuba, who felt his family’s pain. Dr Jorge Perez sat by his isolation bed for days until he regained consciousness.

During those first few hours, Felix shocked him when he said: “Prof, I feel lousy but I’m going to recover. And I am going back to Sierra Leone.” Perez says: “I was really moved, because here was a man who was dying and suddenly he says that.” And the doctor did return to finish his mission.

At times the narrative jumps between places, people and points of interest, but collectively it is a powerful, unique and riveting read. The passion, commitment and dedication not just of the medical volunteers but the whole Cuban nation who support them are inspirational.

It is also a compelling refutation of the US government’s slurs against the internationalism and humanitarian medical co-operation Cuba gives to the world, not least to the poorest. The Cubans resist being called heroes, perhaps because they genuinely are.