Books How to Speak Machine by John Maeda

Primer on computer language sometimes gets its calculations wrong

AMONG the many divides in our world, according to technologist John Maeda, is that between those who “speak machine” and those who don’t. With an aim to influencing the future, his book How to Speak Machine encourages readers to be “early adopters” of the language of computers. 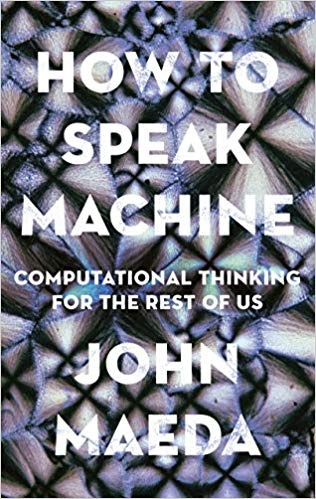 Explaining the principles behind coding to non-coders is not an easy task. As somebody who codes, I liked Maeda’s example of his own wonder when he discovered how loops work, or when he saw the internet for the first time.

These autobiographical elements are helpful and add some narrative to what is mostly a set of loosely-related thoughts, with some strong and sometimes dubious opinions slipped in. While it’s true that coding gives the coder “dictatorial control” over the computer, the link that Maeda then draws to the “god complex” that some coders seem to feel over human beings is an interesting one.

But this doesn’t really stack up – god complexes are quite common in the corporate world, where it’s power, not processors, that count. He writes that a friend of his saved him from a “career catastrophe” by noting that he was detached from the real world, something which “as an artist she found impossible to do” herself. Anybody with any experience of the art world will enjoy that.

Maeda’s style is conversational but the aphoristic TED-ese starts to grate. Artists apparently dig for “what’s underneath the underneath” and art is important because “the earth without art is just ‘eh.’” And, of course, “a warrior can’t be a worrier.”

In a fairly meta example, Maeda tells us that he used to spend a long time preparing his TED slides but nowadays he shows up unprepared. This design philosophy seems to apply to a book which might be a useful introduction to what makes computational products different.

But most of it is not actually devoted to explaining how computers work. Maeda has advocated for the importance of art in education, adding an A for Art into STEM (Science, Technology, Engineering and Medicine) to make STEAM.

Such a conceit, like his book, seems ultimately a patronising attempt to tell artists that they deserve a seat at the table with the computer scientists. The subtext is that art and design are practical – unlike the rest of the humanities, one presumes – and I finished the book wondering what role Maeda sees for history or politics to interrogate the grand claims made for technological progress.