BOOKS I Want to Believe by AM Gittlitz

CRISES breed conspiracies. The burnt phone masts across Britain, torched on the unfounded belief that coronavirus is caused by the roll-out of 5G, testify to this. 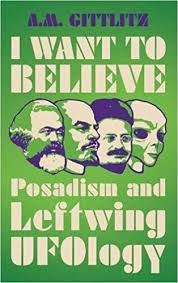 Since 2008, the long recession has seen faith in official narratives falter and proven a fertile incubator for arcane theories like belief the earth is flat. In I Want to Believe, AM Gittlitz has recovered an unlikely left-wing hero for these febrile times in the Argentine Trotskyist J Posadas (1912-1981), a figure now largely remembered for his belief that we need to take flying saucers seriously as emissaries from advanced communist civilisations.

Gittlitz originally wanted to write a pulpy conspiracy novel in the vein of Robert Anton Wilson’s Illuminati trilogy but he soon realised that the story of Posadas was strange enough without having to embellish it with the contrivances of fiction.

This unlikely conspiratorial odyssey begins in early 20th-century Buenos Aires. After a thwarted career in football, a young Posadas turned his energies to political activism, joining the Workers Socialist Party, and Gittlitz is an able navigator through the ensuing alphabet soup of Trotskyist organisations he travels through.

The interminable schisms often confirm that old Monty Python gag about the animosity between the People’s Front of Judea and the Judean People’s Front. Aside from the internecine struggles of the Fourth International, the book sensitively chronicles the tragedy of the Latin American left in the 20th century.

Only after the formation of the Fourth International (Posadist) does it start getting weird. Forced into exile in a Roman villa after fleeing repression in Uruguay, the organisation begins to resemble a millenarian sect, with a strictly enforced ascetic lifestyle glued together by the fervent belief that world revolution is just round the corner.

Posadas’s utterances were the revealed scripture and they had the customary apocalyptic hue, with his conviction that nuclear war, which he believed would “settle the hash of Stalinism and capitalism,” would advance the communist cause.

Gittlitz does not shy away from detailing the toxic social dynamics of the personality cult that Posadism became as he begins to see enemies everywhere. The manic behaviour of his twilight years mirrors the mental disintegration of that other paranoid prophet, science-fiction writer Philip K Dick, with his rambling lectures about future cosmic harmony under socialism.

As well as revealing this relatively obscure episode of communist history, Gittlitz reflects on the contemporary resonances with current left discourse. Posadists’ fixation with UFOs and interplanetary socialism feed into the recent revival of Marxist cosmism and the generative utopian ideas advanced in books such as Fully Automated Luxury Communism.

Despite believing that jokes would cease to exist after the revolution, Gittlitz traces Posadas’s afterlife as an ironic meme on the left, casting him as an avatar of talismanic power to be deployed in the shadowlands of the online culture wars.

“The old world is dying, and the new world struggles to be born: now is the time of monsters,” goes one translation of Gramsci's famous dictum. Perhaps Posadas is the useful monster we need in this age of conspiracies and cataclysms.