Book Review Marxists in the Face of Fascism

ORIGINALLY published in 1984, this book's reissue is timely in an era where neofascist parties are making seemingly inexorable electoral headway throughout Europe and beyond. 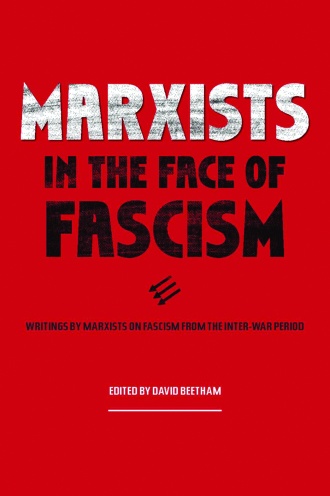 With more than 50 essays, along with an excellent introduction by David Beetham, it sheds considerable light on the parallels and the differences between the inter-war fascists and their successors today.

Divided into five sections, the book’s focus is on writings from within the Italian Communist Party, the Comintern, dissident communists, social democrats and essays linking fascism, capitalist economics and militarism.

While there is a broad range of perspectives, the book’s thrust is essentially a critique of the Comintern and Soviet positions, best exemplified by the writings of August Thalheimer and Palmiro Togliatti.

In contrast to the official Soviet line, their perspective is that fascism cannot be seen simply as a tool of the capitalist class in times of crisis.

While it is utilised by this class to crush the workers’ movement, it has a certain autonomy and an independent social base rooted in the petty bourgeoisie. The contention is that the failure to recognise this in time resulted in disastrous consequences, and missed opportunities, in both Italy and Germany.

In a book weighted with self-criticism, most of the authors believe that following WWI the objective conditions for socialist revolution were ripe but that socialists failed to capitalise on them. Fascism was their punishment and it’s almost painful to contemplate the repeated self-flagellation of Marxists who saw the rise of fascism as a consequence of their own mistakes — their failure to win over the petty bourgeoisie to the cause of socialism.

It’s an almost universal article of faith amongst Western leftists, then and now, that the petty bourgeoisie have an objective class interest in socialism and that fascism can only but fail to deliver for them.

There’s a powerful incentive for this belief — if it is not true, then socialism lacks the necessary mass support to ever come to power. But what if the cruel political reality is that socialism is simply not in the objective, material, class interests of the middle classes whereas, at least in times of economic crisis, fascism is?

What if the material interests of the imperialist petty-bourgeoisie, who seek to maintain their privileged position in relation to the domestic working class and to the global proletariat, really are better served by fascism than socialism?

And what if fascist economic strategy of using state power to bolster that privilege at the expense of the proletariat, including through militarism, is not doomed to self-destruction but is in fact entirely feasible?

The failure to admit this possibility is evident throughout the book and can be seen to lie behind the exaggerated optimism about fascism’s collapse which was a hallmark of communist complacency around fascism in the early years of its development in both Italy and Germany.

Yet for a serious and nuanced overview of the key debates around fascism — what it is, its relationship with capitalism, and how to fight it — written by those at its receiving end, this is essential reading.

Marxists in the Face of Fascism, edited by David Beetham, is published by Haymarket Books, £19.99.

‘No surprise’ national lockdown is mooted amid Covid testing crisis