THE TERMS “polymath” and “visionary” may be overused but they’re entirely appropriate to Alasdair Gray, the novelist, playwright, poet, polemicist, painter, scholar and translator who has died aged 85.

Glasgow, Gray’s birthplace and home, hosts several of his public murals. The playful and beautiful celestial ceiling of the Oran Mor arts and theatre bar is a visual symphony in shades of blue, mixing symbols from astrology, mythology, science and natural history. 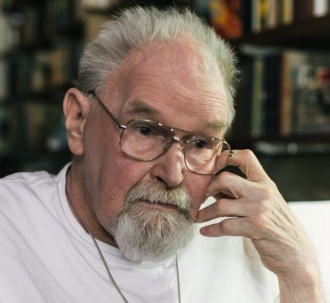 This mosaic of moods and influences, typical of Gray, is exemplified in one of his 90 short stories The Trendelenburg Position (1993), which flips between frivolity and philosophy as an elderly dentist regales a captive patient with reflections on politics, sustainability, nationalism, virtual reality and sectarianism in football.

Gray was born in 1934 into a working-class family absorbed by politics, books, theatre and music. His childhood was blighted by poor health, hospitalisation, wartime relocation and poverty but he showed flair as a writer and illustrator. At the age of 11, he read his verse and prose on Scottish radio and at 14 his stories were published in Collins Magazine for Boys & Girls.

In 1952, he entered Glasgow School of Art to specialise in mural painting and began Thaw, an autobiographical novel. When asked which experiences had informed his fiction Gray said: “The second world war, my asthma and eczema, my mother’s death, my time at art school, my muddled love life and the foundation of the welfare state that educated and supported me.”

Over the next 30 years, while teaching, painting stage sets and writing radio plays, Gray transformed Thaw into the modernist fable Lanark (1981). The grittily realistic story of a talented but unhappy working-class Glaswegian lad Duncan Thaw is embedded in an allegorical fantasy about a man called Lanark, who occupies the nightmarish and desolate city of Unthank.

An astonishing salmagundi of history, myth, satire and ribald humour, Lanark influenced a generation of writers, including Irving Welsh, Iain Banks, AL Kennedy, Janice Galloway, Jonathan Coe and Will Self.

Gray’s work reflects his compassion, belief in Scottish self-determination and unwavering commitment to socialism. 1982 Janine (1984) uses the elaborate sexual fantasies and drunken self-loathing of a middle-aged security technician to reflect on Scotland’s identity as a nation “wired for war” by Britain and the US.

Poor Things (1992), recipient of the Guardian and Whitbread prizes, reworks Mary Shelley’s Frankenstein and pastiches the late-Victorian novel. A woman created from a resurrected corpse and educated by male mentors develops her own identity as medic, feminist and socialist. A touching tale, it attacks free market capitalism, religious fundamentalism and sexual exploitation.

Other novels of note include McGrotty and Ludmilla (1990), a retelling of Aladdin which highlights Britain’s identity as “a plutocracy pretending to be a democracy,” A History Maker (1994), a science-fiction allegory about the rejection of warfare, and Something Leather (1990) a tale of sexual fetishism, gender, class, power and social exclusion.

Gray’s plays include Working Legs (1997) a drama for actors with physical disabilities. Set in a future in which mobility is a social liability, it’s a tragicomic examination of the everyday indignities inflicted on vulnerable people by callous governments.

In person, Gray was generous and exacting. When I interviewed him in 1999, he annotated my pre-prepared notes in swirling lines of ink and posted them back to me. They are a thing of elegance, erudition and wonder.

But he was mildly outraged at my assertion that 1982 Janine is too complex to read while gripping a bus handrail on the way to work: “I’m sorry you can’t read my work on a public transport vehicle,” he said, “I read Little Dorrit on a tramcar.”