ALL credit to Ken Fuller. After Love and Labour, the mighty opening tome in his Red Button Years series, he’s avoided the “sequel sag.” 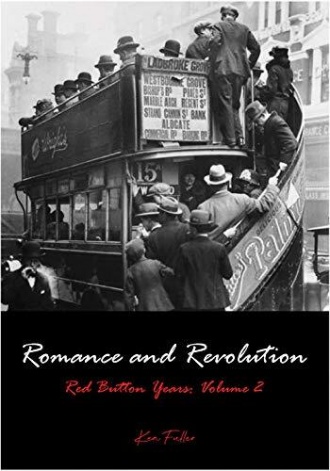 Romance and Revolution  delivers the same compelling combination that marked out the original as one of my fiction books of 2020.

Successfully moulding together stories of the personal, the industrial and the revolutionary responses to a crisis of capitalism, his novel captures the febrile atmosphere in Britain during the  later stages of the first world war, as witnessed by Mickey Rice, militant trade unionist and bus driver.

Still reeling from the death in a German air raid of Dorothy Gridgeman, his partner and fellow member of the Socialist Party of Britain, the novel interposes Rice into a sequence of fascinating and pivotal encounters.

Arguably the most intense is the relationship that Mickey has with Dorothy’s upper middle-class  mother Ines, as they come together in a shared grief and temporary loneliness.

Fuller is good at sex. His writings about the couplings between Mickey and Dorothy are affectionate, anatomical and passionate.

The relationship with Ines is equally well-written but it is clear that theirs is not a sustainable affair, with the class differences between them becoming more apparent as the novel develops.

In parallel, Mickey’s trade union role intensifies as negotiations between the bus drivers and their employers for better wages and improved conditions steps up with the end of hostilities.

Meetings of union executives could make for the dullest fiction, but Fuller injects a real sense of the vitality of the debates and the urgency of the issues under discussion.

It’s not just the bus drivers pushing back against wartime privations. The novel encompasses the growth in militancy by a range of workers, including the police, train drivers and soldiers.

The soldiers’ animus is exacerbated by a number of issues, not least the British government’s desire to send thousands of them to help snuff out the new Bolshevik regime in Russia.

And it is the fact of the Revolution and the inspiration it provides to the more advanced sections of the British working class that truly drives the narrative in this book.

Events centre around the impressive figure of Theo Rothstein, a naturalised Briton doubling up as the unofficial, or rather unrecognised, Soviet ambassador who meets with leading trade unionists such as George Sanders at a Lyons Corner House to encourage support for the new regime in the face of growing imperialist aggression.

Via the experiences of Mickey, the process that will lead to the foundation of the Communist Party out of its various predecessor entities unfolds.

The only weakness in this novel is the literary device Fuller employs to allow the reader access to the interior thoughts of Mickey.

He has a series of conversations with an image of Dorothy, one that he knows is imaginary and the work of his own grief.

It’s a somewhat contrived device — there’s nothing to stop the author directly articulating Mickey’s worries and concerns and, by the end of the novel, Mickey has no need of such direct reassurances.

Nevertheless, this is fine novel that informs and inspires in equal measure.

Available digitally and in print online.