Putting the ‘con’ into consultation

EMMA DENT COAD shines a light on attempts by the notorious Kensington and Chelsea Council to railroad through a development plan that no-one locally wants or needs, while slandering opponents as ‘Nimbys’

WE WERE delighted to host a Claim the Future event earlier this month with John McDonnell, looking at issues that affect our borough.

I chose to speak on a subject I’m all too familiar with, which affects everyone’s daily lives, which can utterly destroy or joyfully re-energise communities, but which immediately sends people off to sleep: the planning system.

For every campaign to save homes, save public parks, save nurseries, libraries, trees and bees, there is more than likely a highly questionable and humungous planning application behind it.

I’ve joined countless protests over the years, chained myself to gates and trees, helped declare a republic to save a housing estate, supported motions to council, met verminous property developers, leafleted, postered, pleaded, begged, petitioned, and even raised my voice a little … but against the juggernaut will of the council, backed up by armies of venal developers and troops of slippery consultants, we do, sadly, usually, lose.

Some history. Planning and public health came to the public eye through the mapping of poverty by Charles Booth and Beatrice Webb from the 1880s onward. 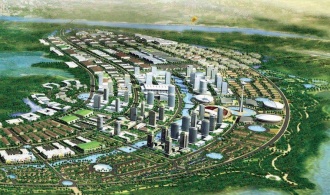 An early plan for a ‘garden city’

This movement eventually morphed into the Town and Country Planning Association. All these historic campaigns and movements contributed to a debate demanding a fair balance of homes for people of all income levels, public space and sustainable communities focusing on public health, long-term employment and wellbeing.

Generations of philanthropists, trusts and charities contributed to low-cost housing, and the post-WWII housebuilding boom funded and run by a Labour government emerged from this good place, building co-dependent communities that were designed around human need.

Many produced excellence, some not, and others suffered from the squeeze on maintenance and management funding over the years, but stability in housing tenure, affordability and, of course, high employment at the time gave a solid foundation for people of all incomes to prevail and thrive.

As we know, the planning process has been utterly subverted by the imperative of developer profits in the grip of political ideology.

The Tories weaponised the planning system, and the needs of those of us who are the nuts and bolts of society have once again been elbowed aside. And we don’t have the tools needed to object, let alone offer viable alternatives.

The planning system, conceived to improve our lives, now turns against us.

The results of this over the years have been poor housing contributing to poor health, and subsequent pressure on the NHS; deregulation leading to very poor construction standards; the shocking pictures of disrepair recently seen on ITV reports (which are no surprise to local councillors) and, of course, the Grenfell Tower fire. Which we see, sadly, the Royal Borough of Kensington and Chelsea Council is just bored of now.

Over the years in Kensington and Chelsea the unseemly scrabble to build against housing targets has meant — for those in political control — a total disconnect with any progressive social agenda.

They build, but for whom? Who needs schools, primary care, elder care? Who needs good public transport? We want homes, at any price! Pack the masses into poorly designed high-rise located in “grot spots” — next to railways, the Westway, a highly polluted roundabout, and watch the profits roll in. Be grateful, plebs!

The aims of addressing “poverty, equity and social justice” were removed from the National Planning Policy Framework in 2012, and social purpose cast aside for financial viability and profit.

There are few legal duties that can be implemented, and the more recent and laudable Socio-Economic Duty, despite its name, isn’t a statutory duty. You can care, if you must.

All social responsibility has been set aside, in favour of fetishising growth as an abstract target, rather than a genuine response to local need.

In K&C we have seen over the years how they tackle poverty: they displace low-income households.

They have “no money” but are considering spending £60 million to buy homes for (permanent) temporary accommodation outside the borough.

The word “regeneration” is a euphemism for permissive development, and our uncaring government under “Lord of Misrule” Johnson is now reforming planning laws to create an even worse “developers’ charter” where local input or consultation would be neutered, vast areas of undeveloped land — urban and countryside — subjected to draconian regulations with automatic planning approval, and a system of design codes which it seems will only be approved if the result looks like Noddy’s Toy Town.

All this is so repellent that even some Tory MPs are revolting.

In the midst of this so-called reform process, the council is targeting a well-known site for development.

Never mind that it’s in Kensal Town, the most multi-deprived neighbourhood in the whole of London, where life expectancy has (according to the updated Marmot report) dropped six years since 2010 — the worst decrease in the country.

The site was formerly occupied by modernist architect Erno Goldfinger’s one and only residential care home, part of the Cheltenham Estate cradle-to-grave project including the magnificent Trellick Tower. 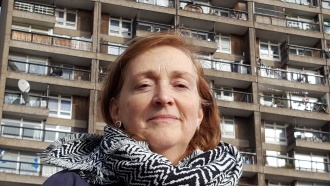 After cursory consultation and quite abominable treatment of some residents (two died of starvation), and me chaining myself to the gates, they flattened the care home in 2009 and put a “temporary” coach park on the site.

Twelve years later, after numerous failed attempts to develop housing on it, the council is back with some funding from the Mayor of London, and this time they mean it.

Ignoring their own supplementary planning document, which refers to the need for day care and replacement residential care, the need for more space for our GP practices and the overwhelming need for social rented housing, they are attempting to railroad through a plan that no-one locally wants.

It proposes a lot of private (“because people want it”) as well as social housing, and a pastiche Goldfinger block, 14 storeys high, in front of Trellick Tower.

When I say “railroad,” this is after months of painstaking supposed co-design and consultation with local resident groups.

These resident groups have gone into the process in good faith, believed they were being listened to, thought they were getting somewhere with their timely suggestions for the site that comply with local planning policy and consider the poverty of the neighbourhood or the ill-health that Goldfinger had addressed.

But no, this was yet another game.

The lead member, bored of pretending to listen, has allegedly “put a tin hat on” and is driving his own preference through, while choosing to denigrate, vilify and slander these good people, calling them Nimbys.

It is frankly despicable behaviour. The Rotten Borough of Kensington and Chelsea may rue the day they took on this group.

This is just one example of the bad faith communications our residents suffer, from those who lit the fire at Grenfell Tower.

We call it “community enRagement.” Underlying it is a David and Goliath battle via an onslaught of deterministic and finely tuned council “CONsultations” pitted against residents without even a slingshot and stones.

So how do we escape this cycle of abuse against low-income families in our communities?

We need to help residents understand the process, and give them the tools to fight.

We need planning education, alongside better understanding of how the council operates — the council that refused to listen when residents warned of a potential catastrophe at Grenfell, and isn’t listening now.

This decision has already cost over £0.5 billion, and some have estimated that once the inquiry and police investigation are over, it could cost the public purse £1bn.

We do not need to take guidance from these people.

When local campaigners demand to be heard, they call it class war. It is certainly not a class war perpetrated by residents — it’s a war perpetrated by Tory elected representatives against those who they were elected to care for. And their strongest weapon is the planning system.

We need housing, but not at any price. Through training and education, we can and we have to stop the development juggernaut destroying more lives in Kensington and Chelsea.