LABOUR movement history is more important than ever at the present time. 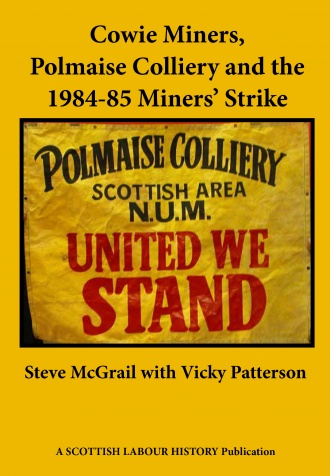 With increasing casualisation and the growth of precarious employment, previous experiences may be lost as a result, but there is so much to learn from previous forms of organisation and struggle, lessons from past failures as well as from earlier successes.

This account of the Cowie miners and their neighbours from the Polmaise Colliery near Stirling is the story of the 1984-85 strike as it was told at the time and in the immediate aftermath.

The book is derived from two pamphlets, one focusing on the strike itself and the other on the stories of sacked miners and together they provide a wealth of information about people’s experiences.

There are lessons of wider relevance too though, as the foreword explains. In 2016, Sue Harley, Steve McGrail’s widow, decided to republish his account, following the government’s decision not to hold an inquiry into police brutality at the miners’ picket at Orgreave in 1984. This book is both a tribute to McGrail and a contribution to the continuing struggles for justice that he had supported with such inspiration.

The Polmaise strike had already begun in February 1984, before the strike started elsewhere, in response to closures and restructuring by the Scottish area management of the National Coal Board. Despite the consequent fragmentation, the bonds of loyalty and solidarity had remained strong throughout.

This was an epic struggle. As activists appreciated only too clearly from the outset, the Thatcher government was determined to break the power of the trade unions via this attack on the miners, whatever the official denials to the contrary. Preparations to beat the strike had been carefully laid beforehand and then backed by the use of the most extraordinary levels of police violence.

These lessons were not necessarily translated into formal political engagements, but they were important lessons all the same. And so were the lessons to be learned about solidarity, as the subsequent interviews with sacked miners also demonstrated.

History comes alive through these stories in what is a very readable book and one with particular relevance in the current political context.

Climate protesters block M25 for third time in a week

Pep ‘sorry not sorry’ for calling for more fans at games