Book Review The Palestine-Israel conundrum warts and all

COVERING some of the most knotty questions about Israel-Palestine, Moment of Truth is an important resource for those who wish to drill down into the details of the debates to gain an in-depth understanding of the conflict. 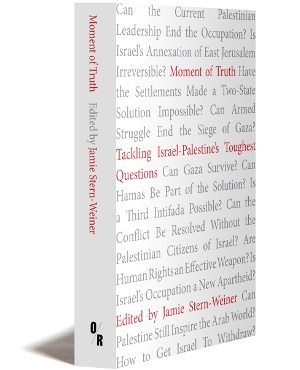 Edited by Jamie Stern-Weiner, a graduate in Middle Eastern Studies at the University of Oxford, the book is structured in an interesting way, with the expert contributors make their conflicting cases in a series of exchanges, with other respondents also weighing in.

This “should inspire intellectual humility as well as political urgency,” argues Stern-Weiner, “as well as a readiness to acknowledge that … compelling arguments can be advanced from multiple sides.”

Questions discussed include whether Israeli settlements have made a two-state solution impossible, whether armed struggle can end the siege of Gaza and if Hamas can be part of the solution.

The contributions, from all sides of the debate, are always interesting and often illuminating.

For example, Ghaith al-Omari, a former adviser to Prime Minister Mahmoud Abbas, inadvertently highlights his own political blind spot when he argues that Israeli political party Likud “have not used terrorism to pursue their goals.”

On the question of whether another Intifada (popular uprising) is possible, the Popular Front for the Liberation of Palestine’s Leila Khaled is hopeful “Israeli policies and measures against the Palestinians and their land will continue to create new intifadas.”

In contrast, sociologist Jamil Hilal argues that “the fragmentation, illegitimacy, co-option and inertia of the Palestinian national movement remains a decisive obstacle to mass political mobilisation.”

Elsewhere, author Norman Finkelstein urges Palestinians to organise mass non-violent resistance to mobilise their supporters across the world and shift global public opinion in their favour, shaming and compelling the United States to act on Israel’s violations of international law.

John Dugard’s essay is a particular highlight, the ex-UN Special Rapporteur on Human Rights in the Occupied Palestinian Territory cogently explaining how Israel’s repressive policies and actions in the West Bank and East Jerusalem bear “the hallmarks of apartheid as applied in South Africa between 1948 and 1994.”

He also speaks to contemporary British politics when he argues that Israel uses three principal instruments to secure continued support for its ongoing occupation — “pro-Israel lobbies, Holocaust guilt and the labelling of those who oppose Israel as anti-semites.”

“The label of anti-semitism is a powerful weapon in the hands of Israel and its apologists,” Dugard presciently notes.

“Public figures can be, and have been, destroyed by it.”

Complaints of harassment and abuse at Sellafield were ignored by management, HR consultant says

Hundreds of Cuba campaigners to rally against US blockade