IT’S not unheard of for terrible people to hide behind ridiculous names and Dr Leigh Francis Howell Wynne Sackville de Montgomery Vaughan-Henry is no exception. 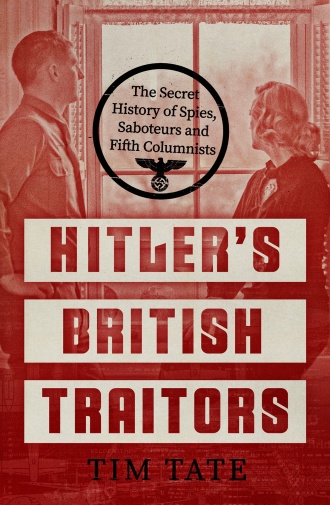 The celebrated conductor, musician and author was a leading figure in Britain’s so-called fifth column of nazi sympathisers. A diehard fascist and violent anti-semite, his aim in the run-up to the second world war was to expedite Britain’s transformation into a fascist regime under the auspices of the Third Reich.

Vaughan-Henry is but one of many such unsavoury characters who populate Tim Tait’s Hitler’s British Traitors, in which the journalist and historian delves deep into newly released documents from MI5 to assemble an extensive list of culprits.

Communications between the emergency services were severed by William Gutheridge and Wanda Pendleton, who clipped wires by night. military designs and plans were smuggled to Berlin by Edgar and Sophia Bray and 16-year-old Albert Munt tried to create a beacon for the Luftwaffe by setting fire to six houses.

Marginally less conspicuous but far more dangerous acts of treason were committed by those who, cloaked by the trappings of the Establishment, had infiltrated the upper echelons of the British state.

Tory MP Captain Archibald Ramsay founded The Right Club, an organisation whose ostensible purpose was to free Britain from “Jewish domination in the financial, political, philosophical and cultural sphere.” If that wasn’t deplorable enough, he was preparing for an imminent fascist revolution, to be brought about by a military coup d’etat, three of which were plotted by the organisation.

Tait explores many engrossing accounts of espionage and counter-espionage uncovered in the archives, as well as the jaw-dropping ineptitude and complacency of the authorities who, though all too keen to imprison and execute petty criminals recruited by German intelligence, displayed a characteristic restraint when dealing with far more threatening and powerful traitors.

Vaughan Henry was interned for the duration of the war, so too was Ramsay in 1940 — though he retained his parliamentary seat — while Lord Sempill, who sold military secrets to Japan for 15 years, escaped both prosecution and internment and was instead quietly retired.

Tait’s formidable scholarship paints a picture of Britain during the war that is a far cry from the reassuring story told about our collective heroism of a nation united under the banner of Keep Calm and Carry On.

But the book hints at something even more sinister than the existence of fanatical ideologues hell bent on imposing a fascist regime and greedy chancers out to make a quick buck.

How would “ordinary” people have reacted if Britain had capitulated to nazism? It’s easy to imagine a spirit of resistance would have flourished under occupation but, through complacency and collaboration, perhaps fascism would have found a firmer footing than we like to think.