Off-the-wall delights in this 'bemused meditation on mortality'

JUSTIN MITCHELL’S first solo album The Garden Of Earthly Delights is lovely — funny, quirky, jazzy, funky, surreal and avant-garde, like the soundtrack to a drive-in sci-fi zombie movie set in a haunted fairground. And that’s just one of the tracks.

The title is a reference to the Hieronymous Bosch painting, with Eden on one side, Hell on the other. The 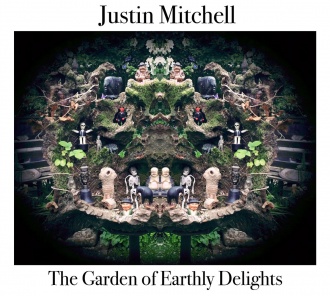 garden is where we all are now and, more than anything, multi-instrumentalist Mitchell’s album is a bemused meditation on mortality.

Rapture for Rupert, an ecstatic multilayered fanfare rising to an echoing crescendo, sets the mood. It’s dedicated to maverick artist Rupert Hayes, who died in 2018. Though informed by his good friend’s passing, there’s a joyous, life-affirming quality to the album.

Until now Mitchell has probably expressed himself best on trumpet and keyboards in the various incarnations of the Happy Accidents, an imaginative jazz-leaning bunch led by Canterbury musical guru Graham Flight, a veteran of the Wilde Flowers, a band that numbered luminaries Kevin Ayers, Richard Sinclair, Hugh Hopper and Robert Wyatt in its ranks as the 1960s turned psychedelic.

There are echoes of the Accidents in Mitchell’s work but also of Morning Star favourite Wyatt, not just in instrumentation but also in making best use of a restricted working method.

“I would have really liked to have ‘real’ drums and bass but, in the end, things are what they are — and we are just very lucky if we have something we look forward to getting stuck in to when we wake up,”Mitchell says.

Served up with humour and gravitas, his very own Garden Of Earthly Delights is a fine addition to the corpus of the so-called Canterbury Scene.

CD available at justinmitchell1.bandcamp.com/follow_me. A longer version of this review first appeared on whitstableviews.com.