Theatre Review The inner life of a legend

THIS little gem packs a punch way beyond its 100 minutes. The essence of Martin Luther King’s final speech, prescient of his end, is deconstructed in an award-winning play that debunks the legend but enriches the human figure who was the heart and soul of the US civil rights movement. 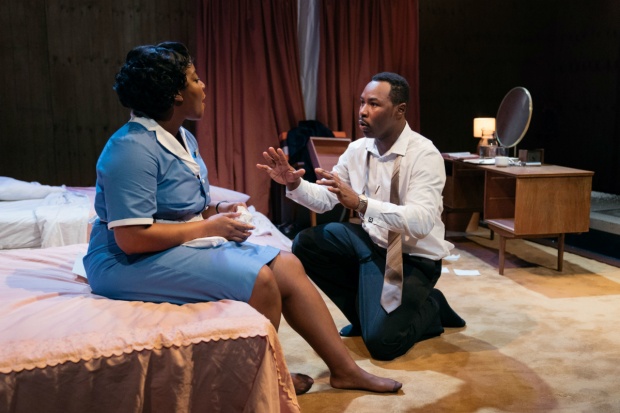 After delivering his famous impromptu sermon “I’ve been to the mountaintop” on behalf of striking sanitation workers, King faces the last night of his life in a bland Memphis motel room. His only company appears in the form of beautiful maid Camae.

The unusual relationship that develops uses the fabric of his last speech to expose the tired, frightened and sick Reverend King’s strengths and frailties, his passion and his fears.

Gbolahan Obisesan’s very human King, suffering from homesickness, stinking feet and the need for coffee and cigarettes, is a dead ringer for the reverend, but he does not allow the confident, rich tones or the associated dignity of his celebrated speeches to conceal either his fallibility or his vulnerability.

Rochelle Rose’s dynamic performance as the novice motel maid Camae is the catalyst that draws out King’s inner life. The straight-talking and larger-than-life black woman dominates much of the interaction as she flirts, goads and teases out King’s hidden world with personal and political barbs, compliments and advice.

As King realises that Camae is far more than she initially proclaims, he is forced to examine his own mortality in personal terms and within the civil rights movement.

On the eve of his tragic assassination it might be expected that this two-hander would be overly sententious and sombre, but it is anything but that. Ironically, Camae is no angel and Roy Alexander Wise directs her to achieve the maximum sassiness in her dealings with King’s self-consciously vain and righteous demeanour.

The final dream-like sequence, where projected images spin through the decades since King’s death, provides the play with yet another dimension and illustrates his struggles in broader historic dimensions.

This compelling production deserves much more recognition than its small but appreciative audience at the Old Vic. After its Bristol run, it's on in Birmingham — don't miss.